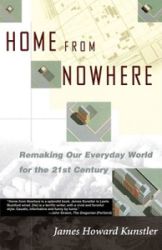 James Howard Kunstler penned The Geography of Nowhere in an attempt to answer the question: why is America so obscenely ugly? His answer came in the form of a cultural history of the United States, one that introduced lay readers to urban planning and enticed them with its relevance to their lives, not to mention Kunstler’s playfully vicious style. As much ground as it covered though, and as hilariously as Kunstler excoriated suburban sprawl and modernist building, he offered no solutions to the problems he detailed, except for the hope that oil would peak and destroy the entire rotten system. Home from Nowhere follows in Geography’s footsteps,  demonstrating how communities can be restored and are being restored– and elaborating on why he is hopeful for our future.

Home from Nowhere is less a book in its own right, and more a continuation, or a fulfillment, of The Geography of Nowhere. It begins by repeating Kunstler’s basic criticisms of the unraveling of America’s urban fabric, detailing his beef with the suburban sprawl which replaced traditional cities.  Kunstler’s perspective is different than that of Chuck Marohn (Strong Towns) or Andres Duany (Suburban Nation). While those authors focus on sprawl as a financial loser, Kunstler examines planning from a more humanistic perspective, probing into how traditional and planning both effect us, as people. Crucial to Kunstler’s view of urbanism is a sense of “place”. Traditional neighborhoods and cities have this sense of place: they have clear centers and edges. They can be defined. Sprawl, however, is a seemingly endless  and stultifyingly homogenous expanse of asphalt and neon — a desert of concrete that engenders feelings of lostness and despair in those trapped in it.

Home builds on Geography first in providing ample illustrations — not photographs,but attractive and elegant sketches which demonstrate architectural or planning concepts (like symmetry and proportion) or by depicting streetscapes and homes which can be emulate. Some chapters elaborate on the problems which inhibit the restoration of American urbanism, like real estate taxing policies (“A Mercifully Brief Chapter on a Frightening, Tedious, but Important Subject”) that discourage the erection of fine buildings and promote instead the conversion of downtown into parking lots. The remaining third of the book is dedicated to covering the travails and triumphs of not only new urbanist planners like Andrues Duany and Peter Calthorpe designing communities, but concerned citizen-politicians who have been laboring to effect changes in their own cities, restoring traditional neighborhood development. Part of Home is a response to the criticism of new urbanist projects that most of them have consisted of greenfield development — new development far from city cores, in effect creating much better suburbs but suburbs all the same.  Working within existing cities means constantly struggling with minds locked into old thinking. This argument is dated now, of course: since the bubble burst in late 2007, the new urbanists have been focusing on infill, on reactivating dead spaces inside cities. The wind is blowing in the direction of urban restoration, and Home from Nowhere chronicles its beginning.

Although the recap of The Geography of Nowhere means that Home could be read by itself,  Kunstler argued so well before that the first third seems watered down in comparison. The encouraging work he reports on is a welcome addition to the jeremiad-like Geography, though, and recommends itself to those concerned about the shape of America’s cities. Kunstler’s own personality imbues the narrative with strength: he’s an interesting man, pining for a lost world of decorum, virtue, and grace and wanting to see it restored — first through the built environment.

Citizen, librarian, reader with a boundless wonder for the world and a curiosity about all the beings inside it.
View all posts by smellincoffee →
This entry was posted in Reviews and tagged architecture, cities, civic awareness, humanities, James Kunstler, Politics-CivicInterest, urbanism. Bookmark the permalink.