Posted on December 13, 2012 by smellincoffee 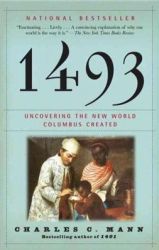 Although Christopher Columbus’s reputation as an intrepid explorer doesn’t withstand historical scrutiny,  Charles C. Mann believes Columbus has a legacy still worth honoring. No, he didn’t prove the world to be flat — that’s a myth peculiar to American schoolrooms — and his attempt to establish that the world was smaller than conventional wisdom held would have failed were it not for the existence of the Americas. But Columbus made the world smaller, through his actions — for he not only ‘discovered’ the new world, he aggressively promoted interactions between it and the old. What began as the Colombian Exchange, we now call globalization — and its effects have been profound from the start. Such is the story of 1493.

Throughout most of recorded history, the economies of large polities tended to be self-contained spheres.  The economies of the Roman and Chinese empires, for instance, were largely separate  aside from a trickle of activity along the silk road.  The modern age is marked, however, by a world economy. No sector of the Earth, no community however small, conducts business in a market smaller than the entire globe. This dense interconnectivity is made possible by both by powerful transportation, in the form of fast-moving planes, ships, and delivery trucks, and the near-instantaneous telecommunications networks. It began, however, with enormous trade galleons tying Spain to central America, and its holdings there to  China. The influx of so much silver into China’s markets played havoc with its economy, leading to decades of instability. Crops from the Americas became staples of the global food market, allowing for a prolonged population boom in China and alleviating famine in Ireland, at least until the new crop the Irish came to depend upon, the potato, was hit by blight. The habitat of both plants and animals spread wildly, and it wasn’t just large fauna like pigs and horses that found new ground:  bacterial populations flourished, and with them disease. In 1491, Mann detailed how the human landscape of the Americas was laid waste by the arrival of European diseases like smallpox; here, another population, that of the west-coast Africans, is reduced to slavery because of their resistance to malaria.

People tend to like histories of themselves, of great people doing great things — but this is a material history, very much in the vein of Guns, Germs, and Steels, one which demonstrates how human history is often driven by outside factors — here, by access to resources and the economic changes they allow. Although humans are active as agents, initiating the changes, the outcome is never what they expect: the effect is rather like Odysseus’ sailors opening up the bag of wind and being blown wildly off course.

Mann’s history of early globalization covers the changes being wrought across the globe, missing only the mideast. Though dense, Mann is quite the storyteller, at least until the final leg of the story when he wanders into the rubber plantations of South America and the story loses some steam, getting lost for a while charting the growth of communities of runaway slaves in the jungles. The  work isn’t as tightly focused in its latter half as in the first, but Mann does tend toward the informal, combining standard narrative with merry anecdotes from his first-hand explorations of the subject. Early on, he spends three pages detailing how he investigated a word Columbus used, eventually concluding that yes, he did mean exactly what we think he meant. The investigation is interesting to a word-nerd like myself, and amusing for its irrelevancy, but it’s an example of the way he tends to wander off.

1491 was for me, the book of the year in 2010. Earlier in the summer,  when I looked back over the past five years and reflected on the stand-outs, it ranked among them. Its sequel is strong — it puts up a good fight — but it’s not quite in the same class.   Even so, I’d recommend it to those interested in the economic impact of the age of discovery, especially if they like rubber-tree plantations.

Citizen, librarian, reader with a boundless wonder for the world and a curiosity about all the beings inside it.
View all posts by smellincoffee →
This entry was posted in Reviews and tagged age of discovery, Charles C Mann, China, critical history, disease, economics, globalization, goods/services, history of science, material history, money, slavery and rebellion. Bookmark the permalink.