Posted on September 8, 2020 by smellincoffee

Yesterday, I finished The Brothers Karamazov, and, with that last page, completed  the Classics Club challenge.   I began the challenge in September 2015, and pecked away until late  2018, when I realized I had two years left and over half the stack still to tackle. Just for my own amusement, I  took a look at how my reading was dispersed, more or less*: 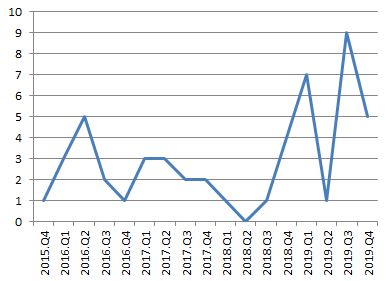 As you can see, I started making a concerted and deliberate effort only at the end of 2018, although this was interrupted by Red Dead Redemption 2 in late March and April of last year.  (That huge dive in Q2 2019? Allllllll Arthur Morgan’s fault.)  By way of wrapping up, here are a few highlights:

Will the Classics Club return?  Absolutely;  I’ve been keeping a word file with ideas, and will start the challenge again on January 1st, 2021, which is when the list is scheduled to go live.  So far I only have about twenty possibilies, but I’m shopping and adding.

*I stay more or less because I created it in late ’19, in anticipation of finishing Brothers K in December. For that graph to have remained accurate, I would have needed to add an extremely long tail to account for my farting around throughout all of 2020.

Citizen, librarian, reader with a boundless wonder for the world and a curiosity about all the beings inside it.
View all posts by smellincoffee →
This entry was posted in General and tagged Classics Club. Bookmark the permalink.