Posted on January 2, 2020 by smellincoffee 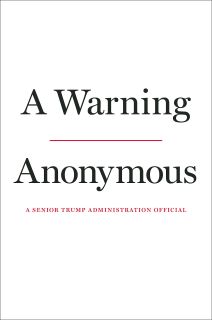 In 2018, a disturbing op-ed ran in The New York Times declaring the existence of a secret band of White House staffers who were ‘working diligently’ to frustrate part of President Trump’s agenda and what they called his “worst inclinations”.   As relieving as it sounded that there were adults in the White House…they weren’t elected, and the idea of some convert cabal undermining Trump’s agenda played right into the president’s narrative about being at war with the DC establishment .    Now, a year later, the author of that same op-ed writes again to declare that the ‘resistance’ is crumbling inside, as the participant staffers have either left or lost the will.   Now, it’s up to Americans to evaluate the character and actions of the chief executive, and —  in November of this year — to render judgment.   A Warning presents the case against Donald Trump  to the American people.

What can the author say about Trump that hasn’t been said, and what behavior can they reveal that we haven’t born witness to already?   A Warning examines different aspects of Trump — his character, his  strengths and weaknesses in various roles as president, his personal and professional relationships — but in truth,  given that Trump makes no effort to hide his inner self, and the fact that we’ve had several books of this kind already (Fire and Fury and Fear) , we know what we’re going to find here.  An intellectually vacant lecher with the attention span and the temperament of a toddler,  who cannot be bothered to take any bit of his job seriously except exulting in the acclaim it gives him; a vulgar and reckless man who bullies staffers and world leaders alike,  whose only thought in any crisis is tending to his own vanity.   He is, in summation, the opposite of a leader, and a constitutional nightmare waiting to happen.

If the reader was not convinced by the review of Trump’s character — the author uses Cicero’s On Duties to evaluate the president by, so it’s particularly damning   —  there are also the practical considerations, like Trump’s economic ignorance (tariffs are taxes on Americans, not outside sellers), his willful destruction of relationships with the United States’ longstanding partners in Europe, and his bizarre courting of third-world thugs, among others.   Curiously, the rupture of the Iran deal, which destroyed American diplomatic credit, is not mentioned.   In the end, the two arguments come together: in a crisis, do we really want someone this distracted and petty, who has a record of bad policy decision, holding the reins?    While there are some decisions a critic could still cheer him for – – I wanted us out of the middle east in 2006 —   that can’t mean excusing him for willful ignorance and gross incompetence.

In the end….well, I don’t know how effective A Warning will be,  at a time when  the worse impulses of the human animal are so easily engorged and marshaled by social media.  It’s worth reading, though, just for a full  and focused appraisal of the strangest administration in US history.

Citizen, librarian, reader with a boundless wonder for the world and a curiosity about all the beings inside it.
View all posts by smellincoffee →
This entry was posted in Politics and Civic Interest, Reviews and tagged Hail to the Chief, Politics-CivicInterest. Bookmark the permalink.

6 Responses to A Warning