The Only Plane in the Sky

Posted on December 22, 2019 by smellincoffee 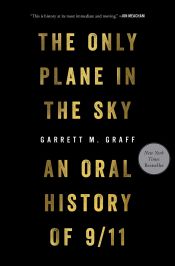 If you ever only read one book about 9/11, make it The Only Plane in the Sky.   I have rarely been as absorbed by a book as this one.     It’s a book less masterfully written than edited, for the content here is not the author’s narrative, but rather the impressions, thoughts, and recollections of a staggering variety of Americans who lived through this day.   Through them, we  relieve the sleepy tedium of the day before, the brilliant clear morning that preceded the chaos, the first tremors of confusion,  and then we are thrown headlong into the abyss as everything goes to hell —  and then, finding other survivors, try to find our way out as  citizens and professionals alike turn into heroes.   We are in New York,  D.C,  Pennsylvania,  in orbit, at sea, in places very close and far removed.

As I read this, I felt a renewed sense of thankfulness that I was more sheltered from the day’s events as a student than I would be were they happen today.  We heard the announcement in school, we saw the towers fall on television —  and we sat with the cold dread, the anger, the sadness — but were not constantly exposed to the torrent of information and misinformation circulating throughout the day.   By the time we arrived home,   the picture of what had happened was clearer. But Only Plane superbly demonstrates how people close to the action were confronted with both the immediate horrors around them, and the fear of horrors to come.  When would the attacks end? Who was next?     Reading this, I was profoundly grateful, too, to encounter stories I’d never considered before:  I knew nothing of the Marriot Hotel, destroyed by the debris of the falling towers,   and I was surprised to learn that that Pentagon survived as well as it did because the doomed American-77 flight struck a recently reinforced wedge of the building. Had it hit somewhere else, one of the interviewees commented, the jet could have plowed a path clear through the building.

The stories of interest here are too many to number — seeing how clerks and functionaries in the government rallied to the challenge,   or  seeing the day through the eyes of astronauts or submarine crews who only learned of it 12 hours after the fact  — and they run the gamut of human emotions. I read this often with tears in my eyes, either in appreciation for the amazing nobility of people, or for sadness at loss.      It was fascinating, too, to see so many political figures who would be felled by scandals  and the like in the years to come, here performing admirably.    Even higher-ups whose actions in office I strongly despise here  cut a good figure — Cheney,   calmly managing the government’s backup plans while Bush,  eager to get back to D.C. but held back by the secret service, paces aboard a circling plane — Air Force One, the only plane in the sky.

I can only repeat itself: if you only read one 9/11 book, read this one.  It’s a masterpiece of remembrance.

Citizen, librarian, reader with a boundless wonder for the world and a curiosity about all the beings inside it.
View all posts by smellincoffee →
This entry was posted in history, Reviews and tagged history, nine-eleven, NYC. Bookmark the permalink.

2 Responses to The Only Plane in the Sky