Posted on December 5, 2019 by smellincoffee

Well, good news and bad news. The good news is…my book buying ban is OVER, so I have five books on the way.   A few are for next year, but I may try a couple beforehand:

Rubbish: The Archaeology of Garbage
The Origin of Feces
The Secret Life of Cows
Good Reasons for Bad Feelings
Why We Are Here: Mobile and the Spirit of a Southern City
The Sun in the Church: Cathedrals as Solar Observatories

The bad news: my computer is in stasis at the moment, waiting for a new CPU cooler before it comes to life again.    My jet engine-like Coolermaster finally  wore itself out, so I’ve a new one on the way.   In the meantime….well, I’m still working on War and Peace, and hope to finish it before The Brothers Karamozov arrives in the post.      I’ve also finished a few books,  one of which doesn’t appear on goodreads.

First up was A Life Less Throwaway, which was fairly similar in theme to two books I mentioned last week, Tiny Homes and 101 Ways to Go Zero Waste.   The intent of A Life Less Throwaway is to convince readers to be more mindful about their purchases — to buy much less, in general,  to empty of their lives of purposeless things, and to buy only those things which are both useful and of such quality that they can be repaired and passed on to the next generation.     I followed that with Junkyard Planet, which I’m  preparing fuller comments for. 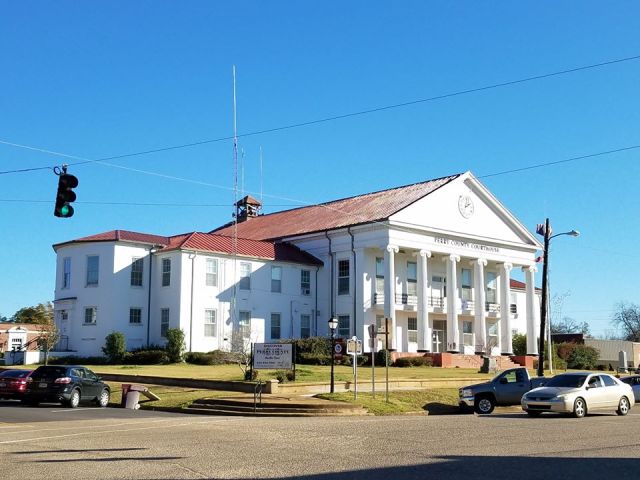 The two other books were Hamburg: A Place Remembered and The Heritage of Perry County, Alabama, two books inspired by complete coincidence. On Sunday I took part in Marion, Alabama’s  holiday bazaar / historic homes tour, and it was a beautiful day for a walking tour.    Although I’d been through Marion before, mostly on visits to the women’s college there (I was part of a science club that took several day-long trips to Judson to work in their lab), I’d never roamed the city properly.    On Tuesday, a writer from Indiana wrote to the library and asked if we had any books on Marion and Perry County, as she wanted to get some idea of what it was like there in the 1940s. I promised her to review some of our literature and report on some of the highlights.

Hamburg: A Place Remembered delivers a history of a place that no longer exists. I have often seen the sign in Perry County that directs travelers to  Hamburg, pointing at….the woods.  You might guess that the village was named after Hamburg, Germany, but that is only true in a roundabout sort of way.  The city founder was from  Württemberg, an independent German principality with no connection to the Prussian city,  but he’d settled in Hamburg, South Carolina along with many other Germans,  and honored his adopted home  by giving the Alabama village he settled its name.    Interestingly,   although Hamburg was a bustling farming town at one point,  another community called “Hamburg Station”  sprang up around the railroad, quite a few miles away but still in the county, and in the 20th century the residents of Hamburg surrendered their name to that community and began to call themselves Vilula, instead.  By that point it was rather moot, because the world wars had caused much of the population, especially the black population, to leave for opportunities in industrial cities.  By the 1960s,  the village faded into memory — though its former citizens often met at reunion parties.  Dallas County had its own German village,  Berlin, though it too died.  The shift in commercial and freight traffic from the river and  railroads to trucks was its doom.   I did a little work research on Berlin a few weeks back when we had a visitor from the real Berlin, who has made it his mission to visit all the places named Berlin in the world.

Moving on to The Heritage of Perry County,  this is part of a collection of similar works we have at the library that are collections of histories, family stories, photographs, etc.  giving a folk history of the county in question.  The Heritage of Perry County includes bits of a hand-written history we also possess of Perry County, including  little hand drawn depictions of residences’ homes, churches, and stores.  The introduction to the handwritten history hails it for focusing on the majority of residents —  “plain folk”, or  ordinary yeoman farmers, as opposed to plantation masters —  and their homes.  Most of the depictions are variants off of a common Southern pioneer template, the dogtrot.

What is a dogtrot? 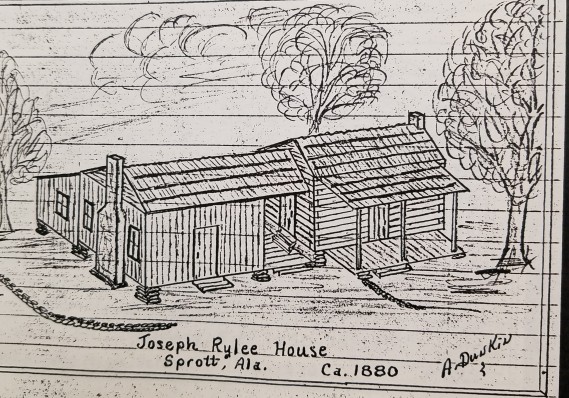 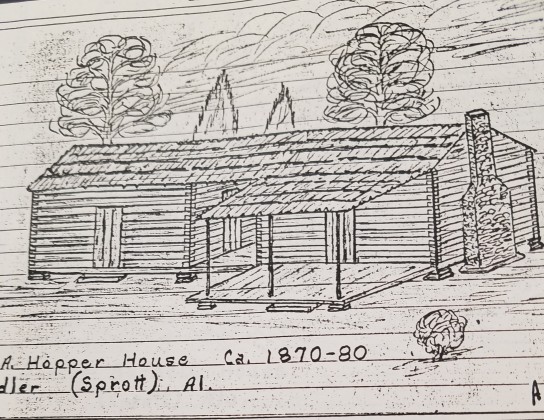 As you can see,  both of these have a common beginning: two seperate rooms, each with its own fireplace, seperated by an open but roofed hallway. The purpose of the design was to funnel wind between the two rooms and provide a “breezeway”.    In these two examples, the owners of the house have made subsequent — but different — improvements on theirs.    Over time, the breezeway would be closed off, and a second story might be added.   At least one home built in this style still stands, albeit as part of Old Alabama Town in Montgomery, Al.    (OAT is two city blocks composed of homes and other structures from across the state which were brought there for preservation, and are arranged to appear like residential or working blocks.  It’s worth seeing if you ever visit Montgomery!) 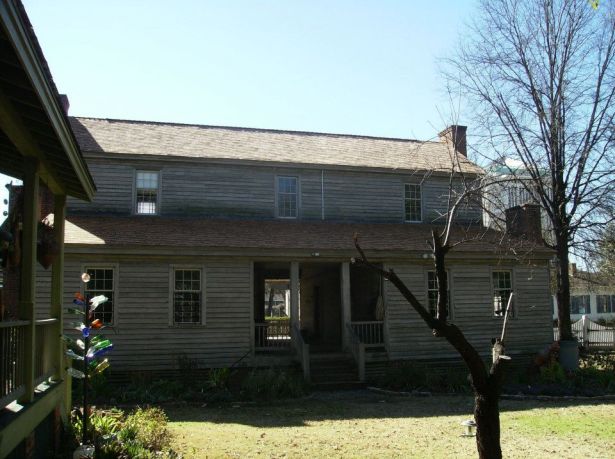 A real-life dogtrot home at Old Alabama Town. Its breezeway is used as an entrance to the residential block.

Citizen, librarian, reader with a boundless wonder for the world and a curiosity about all the beings inside it.
View all posts by smellincoffee →
This entry was posted in history, Reviews and tagged Alabama, history, simple living. Bookmark the permalink.

2 Responses to This and that