Posted on October 8, 2019 by smellincoffee 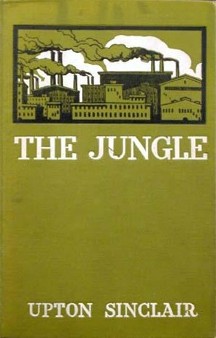 Welcome to The Jungle, but we don’t have fun and games. We have despair, ruin, and death.    The Jungle begins as the story of the Rudkus-Lukoszaite family, who have arrived in America from Lithuania, very hopeful about building a new life for themselves. One of their countrymen owns a prospering shop, and they — leaving the farms of eastern Europe behind — hope to do likewise.     They are directed into the sinkhole of Chicago, Packingtown, where most immigrants are directed, and in that expanse of animal-processing plants, saloons, and shantys, they and their dreams go to die.  In 30-odd chapters we  see a strong, proud man crushed and chewed beyond recognition, until by the final chapters he is barely there at all — but we’ll get to that.

The Jungle is famous, or rather infamous, for inspiring more expansive regulation of the food industry in the early 20th century, despite that not being its intention. The novel was written as a serialized story/tract (published in the socialist Appeal to Reason)  by Upton Sinclair,  with the aim of  stirring up outrage and sympathy with the inhumanity of industrial poverty. Sinclair wanted readers to see the endless line of animals waiting for every little bit of them to be processed, and the endless supply of immigrants who would work for pennies,  who were used up and left to die by the same industry, were one in the same. Instead, people saw the early bits  depicting people falling into vats and being rendered into lard, or  cutting up every sickly animal or moldy bit of meat for use a sausage, and ignored everything else.

“Everything else” is….grim. Depressing. Grisly. Take your pick.   Jurgis and his family begin strong, proud, and hopeful; Jurgis’ response to any dilemma, any challenge, is simple: “I will work harder!”  But after a few bad financial choices, the family is placed on the brink of ruin and stays there, occasionally drifting into dire and deathly straits before bobbing up again, like some ghastly corpse in the water.  Early on, Jurgis is resolved that his wife and the youngsters will not work, but circumstances force otherwise, and soon it’s all they can do to keep off starvation.  Things really fall apart when Jurgis is injured and confined to bed for two months; when he returns, weak and haggard, he struggles to make a way for himself again, and any progress he makes is invariably disrupted by his own temper or outside tragedy.

In the beginning, The Jungle is utterly effective at winning the reader’s sympathy for proud Jurgis and his increasingly desperate family, but then,  in the last third,  the story….disappears.  Jurgis changes, and then he’s just a mute background piece, listening to speeches and  conversations between people designed to invoke a conversion to socialism. The novel ends with a cry to take Chicago, and….well, what of Jurgis? The sad remnants of his family?   We don’t know, and that’s annoying.  Ayn Rand’s novels may have also been author tracts, but at least they gave us resolution.

I enjoyed The Jungle far more than I thought I would, given my aversion to authoritarian systems like socialism,    and am glad I took it on.

Related:
Critical appraisal of novel from the Foundation for Economic Education

Citizen, librarian, reader with a boundless wonder for the world and a curiosity about all the beings inside it.
View all posts by smellincoffee →
This entry was posted in history, Reviews and tagged "classic", American Literature, Gilded Age, poverty. Bookmark the permalink.

13 Responses to The Jungle