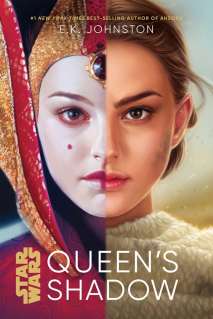 “I suppose we can’t just burn down the whole Senate and start over again with a system that makes sense?” Dormé asked.
“I’m fairly certain that would be treason,” Padmé said. “We’re going to have to work with what we’ve already got.”

So, here’s my dirty secret:   I got into Star Wars a few months before Attack of the Clones came out.  I’m not sure how I got started — it would have been between my online best friend’s passion for it rivaling my Star Trek obsession, or my watching Star Wars on VHS during a Thanksgiving break —  but I rented The Phantom Menace the week after I finished watching Empire and Return for the first time,    so for me they’re part of the same experience, one shinier than the other;   I don’t have animosity towards the prequel trilogy that the original fans do.  (I more than make up for it with my contempt for the Disney movies. )

Padme Amidala has long been one of my favorite characters in the series, her reduction in Revenge to crying-and-dying excepting.   I was therefore excited to spot a novel following her as she left leadership of Naboo behind to take her place in the Galactic Senate.    Although full of interest for those who really like Padme, as I do,  the novel only covers her first year, and little actually happens.    At its best, the story explores how “Amidala” is a separate persona from Padme, one she has deliberately developed;  and The Queen’s Shadow follows how Padme has to learn to adjust her Amidala persona for the new challenge of the Senate.  The book also fleshes out odds and ends from The Phantom Menace.     All the good bits are background, though; the actual story here is lacking…movement.   It’s chiefly about relationships, personal and political, as Padme tries to create a role for herself at the Senate, one that won’t be overshadowed by her countryman Palpatine, or her former job position. If you really like Amidala, it’s a nice book to read, if only to learn more about her background. If you’re looking for an actual story, though…..it’s lacking.

Citizen, librarian, reader with a boundless wonder for the world and a curiosity about all the beings inside it.
View all posts by smellincoffee →
This entry was posted in Reviews and tagged Star Wars. Bookmark the permalink.