Posted on April 7, 2019 by smellincoffee 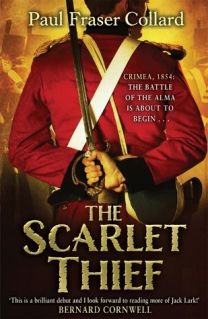 Captain Arthur Sloames stepped off the boat with a terrible secret.  He wore on his shoulders the coat of a dead man.  When his transport left England, he was but Jack Lark — a crushed and anxious common soldier whose ambition had led him to become an officer’s aide. That officer perished of fever en route to a new command, however, and seizing on the opportunity Lark has assumed the man’s identity.  It’s not as if he can do worse than the stuffed shirts leading the army now, after all — but faced against Russian cossacks and massed artillery, Lark soon realizes being the man who gives the orders is never so simple.   As mobs of uniformed men are thrown into battle against one another, Lark is doubly challenged: first,   to survive the brutal opening of the Crimean war, doing right  by his men; and to maintain his charade surrounded by officers who are not nearly as dimwitted as they appear from a distance.

Imagine the frantic action of a Bernard Cornwell novel, but with the humor drastically downplayed; that’s the general feeling here, as Fraser is just as good at thrusting readers into the heart of battle and keeping the pages flying by.  The working-class character suddenly turned officer is very reminiscent of Sharpe’s backstory, though Lark’s promotion is one of stolen valor — or rather, borrowed, because Lark may pose as an officer but he’s a courageous soldier  who doesn’t shy from leading his men from the front.  What he leads them into is not always advisable, but it wouldn’t be a novel without disasters to test characters and learn from.   There are enemies both foreign and domestic; there are the Russians, of course, but Lark is also dogged by an old enemy who has inexplicably turned up in Crimea as well.

What will make Jack Lark stand out, I think, is not so much his similarities to Sharpe, but how very different his story will become.  The novels to come take Lark to India, Persia, and beyond, with roles beyond the battlefield.  I’m  especially intriuged by the idea of an English soldier fighting for the Shah.

Citizen, librarian, reader with a boundless wonder for the world and a curiosity about all the beings inside it.
View all posts by smellincoffee →
This entry was posted in historical fiction, Reviews and tagged historical fiction, military, Paul Fraser Collard. Bookmark the permalink.

11 Responses to The Scarlet Thief