Posted on December 13, 2018 by smellincoffee

The One Device: A Secret History of the iPhone
pub. 2017 Brian Merchant
416 pages 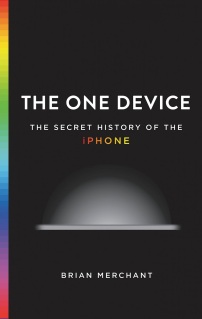 Love them or hate them, smartphones have revolutionized society like few other inventions. Entire sectors of the economy now exist which wouldn’t be there had they had not been invented, and barring  some kind of global collapse it’s unlikely their influence will fade anytime soon.  The One Device: A Secret History of the iPhone reviews not just how a computer company decided to gamble on making what would become the best-selling consumer device ever, but investigates how the various technologies which make it possible came into being, and how everything was finally put together. Merchant illustrates that a lot of key elements were already in existence and argues that Apple’s success was putting them together at the right time,  building on to them, and adopting to market pressures in a few key areas (grudgingly allowing for third-party apps, for instance).  It’s faintly anti-Steve Jobs, for as much as it quotes from Isaacson’s biography it also relegates Jobs himself to the background, choosing to focus instead on the inventors, tinkerers, programmers, and engineers whose ideas and grueling work made the device possible.

Unless you’re a fan of retrotech videos like myself,  you’ll probably be surprised to learn that the idea of smartphones predates Apple, and that the first was made by Apple’s hated foe, IBM — Big Blue itself.  IBM’s “Simon”, however, was before its time, with a battery life of a single hour. Other technologies which were later incorporated also had their genesis in a place other than Apple’s R&D department.  Merchant suggests that many technologies have a long stewing period before they’re truly ready for work. In the mid 2000s,  Apple was at a place where they were looking for an edge. Jobs’ experiment in remaking Apple products as a linked digital hub –the iMac and iPod linked together with iTunes, for instance — was a great success,, but he anticipated iPods being undercut in the future by cell phones and wanted address the problem by turning the iPod in to a phone.  The shuffle wheel, as useful as it was for scrolling through music, was poorly suited for dialing phone number. However, a team working on a tablet computer were onto something with touchscreens, and  Jobs’ focus on the phone project was such that the tablet, the “iPad”, was shelved until a little later.  The phone didn’t meet immediate success, however: Merchant reminds readers that the original only had three apps that weren’t Apple products, all from Google,  and there was no App store. It took increasing pressure from people hacking into their iphones to allow for third-party programs to force Apple’s hand.  It was immediately advertised as an essential feature of the phone in Apple advertisements, and Merchant suggests that the phone would have never taken off (given its price) were it not for the store.

The One Device blends technical research and business history,  and at times its level of detail may cool the interest of a casual reader.  Merchant is generally more personable than technical,  with the exception of the chapter on the iPhone’s processor, and the subjects covered are diverse — everything from software to mining to business deals.  There’s a lot of surprising content in here, too, so if you’ve an interest in popular tech,  The One Device will probably be of interest.

Citizen, librarian, reader with a boundless wonder for the world and a curiosity about all the beings inside it.
View all posts by smellincoffee →
This entry was posted in history, Reviews and tagged goods/services, history, technology, Technology and Society. Bookmark the permalink.

5 Responses to The One Device