Talking to the Ground

Posted on November 12, 2018 by smellincoffee

Talking to the Ground: One Family’s Journey on Horseback Across the Sacred Land of the Navajo
© 1995 Douglas Preston
284 pages 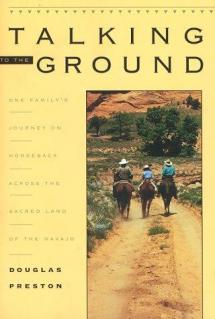 “How does the trail look?” Christine asked.
“Ask me at the bottom,”  I said, feeling a certain queasiness in my stomach. There was no turning back; we had to get to the water, and the water was down there, at the base of Hoskinninni Mesa. There was a short silence.
“You want to rest longer?” Frank asked.
Christine jerked her lead rope knot-free and pulled her horse around.
“Hell no,” she said, “Let’s get this over with.”
I thought, I’m marrying a woman who has far more courage than I do.

Last year I read Douglas Preston’s excellent Cities of Gold, his re-tracing the steps of Spanish explorers of North America, complete with horses and occasional disasters. While staying in Flagstaff in April this year, I discovered a sequel to that work, Talking to the Ground. Here, Preston, his fiance, and his soon-to-be- stepdaughter travel across Arizona, Utah, and New Mexico as they follow a journey from Navajo legend, riding in the shadow of four sacred mountains.  If Cities of Gold mixed  horse travel and history, Talking to the Ground does the same for travel and mythology. All of the locales Preston and his family ride to are introduced in the creation myth of the Navajo, in which a being called Monster Slayer had to rid the world of horrific monsters born of a prolonged war between the sexes; the  geologic formations are considered the remains of the monsters, and of the monster slayer and his sibling.

Although Preston, his wife, and their daughter Selene do not encounter nearly as much peril and problems as Preston did on his previous trip,  this is no easy lope. As before, Preston and his fellow riders carry everything necessary with them, and plan their trip  with a strict eye as to where they can find water.   There were no telephones,  no ranger stations, no safety net:  if horses fell attempting to navigate down a hillside, or the family was caught by surprise by hail or dust storms,  they were on their own.  Perhaps because Preston still carried his experience from the previous trip, the family encounters few troubles beyond days in which water is far too scarce for their and their horses’s liking; they often journey in rain, but  not a horse escapes (a constant problem in Cities of Gold) or is injured.     The meat of this book is less travel misadventures than Preston’s retelling of stories from Navajo mythology and history, offered both as what he knows, and as he receives it while visiting with people — Navajo families and individuals eking out a living for themselves  still — along the way. Everyone is surprised to encounter this family traveling along  horseback, as most tourists arrive by car and roar off as quickly as they arrive.

A common theme of the conversations is how strongly the Navajo feel themselves connected to their land — sustained by it, not just from the food it produces with their care but by its very existence. They explain its importance to Preston as like the Bible or the Constitution: the land is the bedrock of te Navajo experience. Without it, they have no life, no identity. The horrifying misery of the Long Walk is recounted here, an episode of early foreign policy blundering as the American government decided to solve the problem of New Mexican-Navajo inter-raiding by clearing out the Navajo and forcing them to march across the land and make a new life for themselves in a barren place with only marginal supplies, creating an effective concentration camp in the wilderness  with conditions so gruesome that the government did the unthinkable and admitted the mistake. Over and over again the Navajo muse that the mysterious collapse of another people — the Anasazi — may about to repeat itself as heedless development and consumption play havoc with natural cycles and hasten collapse.

While this  horse journey across the Southwest didn’t have nearly the same appeal for me as Cities of Gold, it was nontheless enjoyable, and complements House of Rain, another tour in pursuit of the Anasazi, very well.

Citizen, librarian, reader with a boundless wonder for the world and a curiosity about all the beings inside it.
View all posts by smellincoffee →
This entry was posted in Reviews, Uncategorized and tagged American Southwest, Douglas Preston, mythology, Native America, travel. Bookmark the permalink.

2 Responses to Talking to the Ground