The Believing Brain: From Ghosts and Gods to Politics and Conspiracies – How We Construct Beliefs and Reinforce Them As Truths
© 2011 Michael Shermer
400 pages 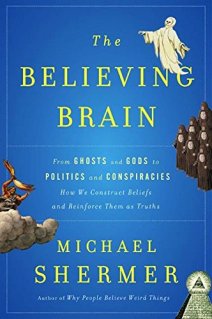 The human brain is an incredible organ, capable of storing vast amounts of information and using that information creativity, to change the world and to fascinate itself.  It is also a belief-making engine. In The Believing Brain, psychologist and skeptic Michael Shermer examines the nature of belief and the biology which sustains it. He then applies lessons learned there to evaluate human beliefs in politics, religion,  and the paranormal.

Most readers will have heard the expression that there is a thin line between genius and insanity. The Believing Brain bears this out, because the same abilities of the brain that allow for creativity, insight, and wisdom can lead to conspiracies and schizophrenia.  Human intelligence is based on the ability of our brains to discern patterns:  to associate a noise or a smell in the wild with a looming predator, to interpret behavior as safe or hostile. Because the biological incentives for robust pattern-detection are great — literally life and death  — humans are extraordinarily good at it, to the point that we see things that aren’t there, like human faces in Mars or in whorls in wood.  The same pattern-making ability that allowed early farmers to plan their labors by the seasons also led them to believing the position of the sun in the sky at the time of their birth meant good or ill.

Another key concept of the early book is the pervasive tendency for humans to believe there’s a force behind the patterns — an agent.  Early on Shermer addressees dualism, which in this context refers to a divide between the mind and the body.   Shermer’s most recent publication, Heavens on Earth, rebukes (among other things) the transhumanist fantasy of downloading brains into computers and achieving life eternal.   The brain and our minds are inseparable, Shermer states; every aspect of our personalities has a physical cause within the cranium, and it’s a little disconcerting to realize at first.  Just as we think of a ghost in the machine — a discrete Mind controlling the body — we tend to look for a purpose behind the connections we see, inventing conspiracies . We all experience this — a stray thought that the universe is plotting against us when the traffic lights are all red during a trip made in haste.  Our brains continually invent stories to explain what happens; even if a person’s nervous system is manipulated by outside lab equipment,  prompting them to suddenly stand up,  the subject will instantly invent a reason why he stood up — “I wanted to get a Coke”.

Shermer has previously examined beliefs like alien abductions, conspiracies, etc. in detail, using books like Why People Believe Weird Things. Here he dissects them again in brief, but chiefly as as an extension of the aforementioned discussion on patterns and agency.  Shermer believes that alien abductions and conspiracies have erupted in part to fill the vacuum created by secularization.  Societies were once bound together by religions which gave the cosmos and the beings within it meaning; now, many people are led to recreate that sense of meaning  by attaching themselves to causes which are part of a grand narrative of the world.

Crucial to understanding belief — any belief — is that emotions precede reason.   Whatever our pretensions, human beings are not rational creatures who approach a subject, collect facts, and then determine whether this or that policy is effective, or this suspicion is valid.   Instead, we lean in toward ideas; we attach ourselves to things that sound good, and then support them with facts.  A disciplined mind can then correct itself  — but we’re inherently believers.  The more emotionally active our brain is at the time of encountering an idea, the less likely we are to make a rational decision.

There’s an enormous amount to process in a book like this, and it recommends itself to those with an interest in lucid thinking.

Citizen, librarian, reader with a boundless wonder for the world and a curiosity about all the beings inside it.
View all posts by smellincoffee →
This entry was posted in Reviews and tagged neurology, psychology, skepticism. Bookmark the permalink.

8 Responses to The Believing Brain