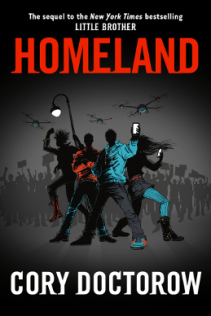 Two years ago, an innocent teenager was swept up on the streets and thrown into a blacksite prison run by the Department of Homeland Security. Initially a suspect for being near the scene of an explosion, Marcus Yallow’s refusal to unlock his phone or give DHS his access codes for his computer and email made him an object of special abuse for the people running this illicit site — and their abuse turned him into a revolutionary, determined to  throw a light on government malfeasance and restore privacy through technological and political means.   Now Marcus is approached by an old ally under tense circumstances, and handed a drive that contains a key unlocking 4 gigs of explosive information  — information that she wants shared if she happens to disappear.   Her paranoid proves to have been justified, and Marcus finds himself with a choice.  What dark secrets are buried in those 810,000 files — and what will happen when &; if he lets them lose on the internet?

Since the events of Little Brother,  martial law in San Francisco is over, but the city is still deteriorating. Unemployment, foreclosures, and bankruptcy plague the city,  even affecting Marcus’ own parents.  His new job  as the resident tech guru for an independent political candidate is one of the few bright areas on the horizon, but being linked to some new WikilLeaks-style dump might spell the end of that. Homeland addresses most of the same issues as Little Brother in the same way,  including the passages where Marcus explains his security precautions to the reader — how he partitions a drive, creates virtual machines to run programs without exposing his files,  that sort of thing. The greatest difference between Little Brother and Homeland is that in in the first book, Marcus  believes the problem can be solved politically, that the wrong people are in office. In Homeland, however, Marcus has seen the “good” president since elected prove himself an ally, not an enemy, of the surveillance & police state.  Although Marcus never in as dire straights as the first book — despite being  kidnapped by goons once, arrested once, and nearly stampeded several times as he participants in an Occupy San Francisco protest that grows ever-bigger by the day — this is still a thriller, one with some interesting side trails like the Burning Man event and a guest appearance by Wil Wheaton. As with Little Brother, the book has a couple of essays at the back — this time on the importance of activism, and for the same reason that Marcus continues struggling even though there’s no winning. To do nothing is to cede the field to complete subjugation and defeat.

If someone were curious about this series, reading only Little Brother would be safe. Homeland does teach its readers to put not their trust in princes, a lesson anyone should take to heart.  I’m personally ten years sober from believing in any politicians. There are a few I admire — chiefly, Rand Paul, who doesn’t just criticize FISA and unlawful drone assassinations, but has actively filibustered against them — but even if he were put into the office of president I would expect him to be immediately warped by it.

Citizen, librarian, reader with a boundless wonder for the world and a curiosity about all the beings inside it.
View all posts by smellincoffee →
This entry was posted in Reviews, Uncategorized and tagged Corey Doctorow, science fiction. Bookmark the permalink.