Overlooking the fair city of Flagstaff is Lowell Observatory, perched atop Mars Hill.  The founder of the Observatory, Percival Lowell, believed based on changing observations of the planet, that it was occupied by a technologically adept civilization, one which had established canals to route water from its own ice caps to fields further away.  He was a wealthy mathematician turned diplomat who had the means to establish his own private observatory, and needed a place which was dry, dark, and high. Flagstaff was ideal.  The inspiring early observations of Mars later proved problematic and the conclusion wholly wrong, but the Observatory has done great work over the years since 1894.. It was featured in Carl Sagan’s Cosmos,  as the place where Vesto Slipher discovered that galaxies were moving (and more quickly with their distance from Earth),  as well as the site of Pluto’s own discovery.   The observatory still does scientific work at its dark-skies campuses further from town, but the original site is by no means retired. Instead, it focuses on public education; I was there for four hours listening to lectures and using telescopes to look at solar flares and the stars.  I also got to see the original Clark telescope, though it wasn’t available for viewing the night I was there. Sometimes the public can look through it, however.

The Clark Telescope, with a dome originally constructed by local bicycle repairmen.

The Clark. Spectroscopy was invented using equipment attached to this telescope. 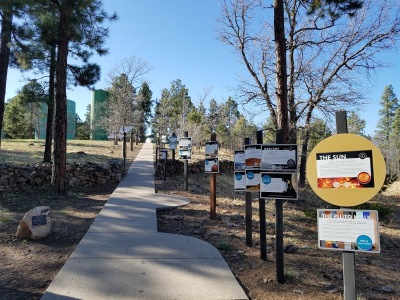 The “Pluto Walk”,  which begins with the Sun and ends at the telescope which discovered Pluto. Between them, signs for the other planets are sprinkled by scale. 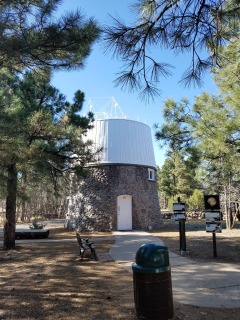 Alas, I missed the Pluto tour, so  I didn’t get to see inside.

This is…not a telescope. It was the original library, now used as the multimedia room or lecture hall. The acoustics are interesting, in that you can hear a pin drop like it’s a fifty-pound weight, conversations from one spot of the room can be heard or not heard in other spots of the room willy-nilly, and if you stand in the right spot you can hear Percival Lowell whispering that there was water on Mars, so hah HAH. 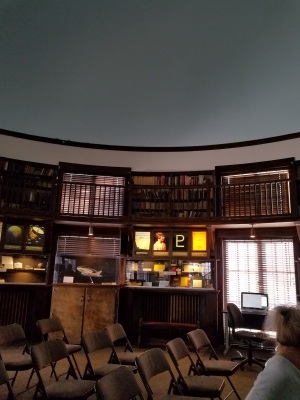 One arc, showing off what’s left of the stacks above. 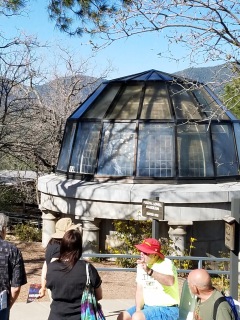 Also not an telescope this is Percival Lowell’s mausoleum. I guess on his deathbed he really did wish he’d spent more time at the office.
Still to come: meteors, painted deserts, petrified trees, and the Canyon.

Citizen, librarian, reader with a boundless wonder for the world and a curiosity about all the beings inside it.
View all posts by smellincoffee →
This entry was posted in science and tagged Encompassing Flagstaff, science. Bookmark the permalink.