Every year I like to  load up my books-read Excel list, sort it by labels, count everything up, and then make a chart out of it.  Every year’s label sets are a little different, aside from old reliables like History and Science.   Historical fiction is safe, too, even though it was waaaaaay down from previous years.  Fiction in general was down, accounting for roughly 25% of what I read. I used Meta-Chart.com instead of Chartgo, and I’m pleased with the result, except for the font size.  Right now to make it readable I’ve had to expand the chart so that it’s clipping into the sidebar.

Just for comparison’s sake — 2017 was my ten-year anniversary, so why not? — here are some  previous years’ pie charts. 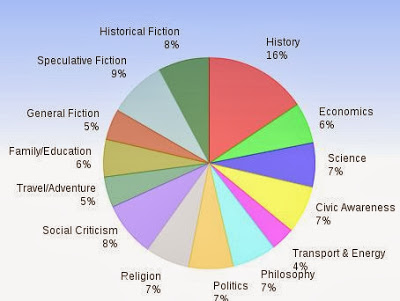 Unfortunately, prior to 2012 I was using photobucket or imageshack to host the graph, so those are kaput.

Citizen, librarian, reader with a boundless wonder for the world and a curiosity about all the beings inside it.
View all posts by smellincoffee →
This entry was posted in General and tagged review. Bookmark the permalink.