Posted on November 19, 2017 by smellincoffee

Another purpose of my weekend in northern Alabama was to visit cities I’ve heard of, but never visited — Florence, Muscle Shoals, and Decatur.  Muscle Shoals earned a name for itself in the 1970s when it became a center for music production, commemorated in the Lynard Skynard song “Sweet Home Alabama”.   My main goal, however, was to see a bank in Florence which is built as a replica of a unique antebellum home.

The original house was unusual in that its two-story colonnade completely encircled the building. Known as the Forks of Cypress, the house burned in the mid-20th century. The columns stand today and are almost visible from the road — at least, in winter when there’s no leaf cover —  but the grounds are only opened twice a year to the public.   Two buildings have been modeled on the Forks of Cypress: this bank and a private home.   The Regions Bank version strays a bit by having a rear addition that juts beyond the colonnade, but even so it’s a beauty.
Downtown Florence in general is the picture of main street urbanism. 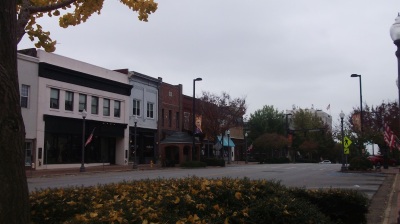 I took numerous shots of downtown Florence’s main street,  utterly taken by the buildings’ close-knit variety. This is a city, not  strip malls and collector roads! 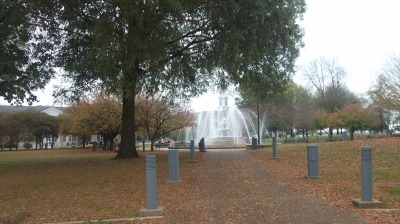 Near Seminary Street, the location of the bank, sits this public park — right in front of the public library, which you can see to the left. 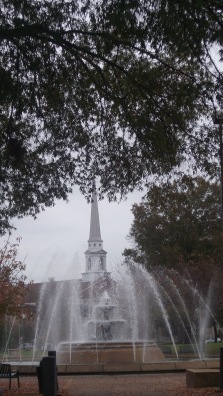 (Still my favorite shot from the weekend…)

In downtown Sheffield, opposite the river, there is a statue that commemorates the musical scene of the 1970s. 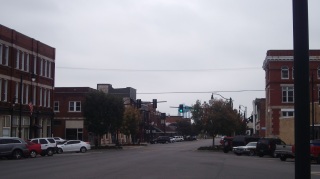 Downtown Sheffield, which I found only by getting lost trying to find Florence.

Speaking of getting lost, I did it  soon after this while navigating down to Dismals Canyon. I failed to notice that my highway “continued” via left turn, and wound up going further south than expected. I entered a curious town called “Phil Campbell”.  I stopped for gas and prompted the clerk, “I guess Phil Campbell must have been some kind of man to get the town named after him?”  She didn’t know who he was, though. She didn’t know how to get to Dismal Canyon, either. She said she was from Spruce Pine,  which despite her tone was not in another country, but ten miles up the road. I looked up ol’ Phil when I got home, though, and discovered he was a carpenter who was asked to build a railroad depot and sidings  so that a local businessman could develop a town. Campbell was rewarded by having the new town named after him, Phil and all. Much of the town was destroyed in the 2011 Super Outbreak of tornado which so savaged northern Alabama, but a grand gathering of people named Phil Campbell raised money for its relief. 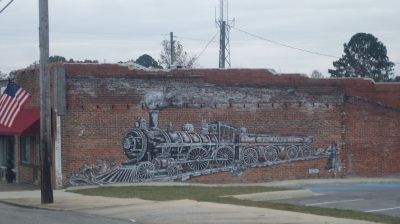 That story may have some bearing on this mural.
I would definitely return to Florence,  hopefully during a weekday when its main street was active, or perhaps during its spring Renaissance Faire. I have friends who dress up as knights and such and attend there, anyway!

Citizen, librarian, reader with a boundless wonder for the world and a curiosity about all the beings inside it.
View all posts by smellincoffee →
This entry was posted in Reviews and tagged TW on the road. Bookmark the permalink.