Posted on October 27, 2017 by smellincoffee
I Contain Multitudes: The Microbes WIthin Us and a Grander View of Life
© 2016 Ed Yong
268 pages 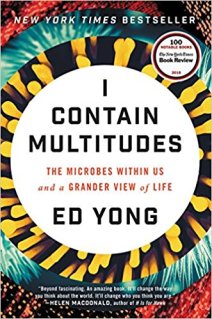 For much of the 20th century, microbes were equivalent with germs – invisible threats that needed to eradicated.  As we move further into a new century ,however, there is some small and growing popular appreciation that microbes play  important roles in human biology.  Microbes aren’t bit players, though, they’re the actors, the support staff, the conductors, and even the orchestra.  That has been amply illustrated by books like 10% Human, which  demonstrated how thoroughly vital microbes are to ordinary physiology.   I Contain Multitudes looks more generally at microbes and their hosts as dynamic ecosystems that are constantly changing.

Microbes had the planet entirely to themselves for most of Earth history, and long after plants and animals have seemingly taken over, they’re still in control.  Microbes are present in the oceans,  allowing coral to flourish and fish to find their way in the dark; they’re within insects,  often a vital part of their maturation process; they’re in human babies from the word go, receiving them with their mother’s milk. (Actually, a lot of human milk seems to feed not the baby, but microbes inside the baby, which then secrete something that the baby digests. Thus even breast-feeding mothers employ bacterial wet-nurses…)   That’s only part of the story, though.

Previously,  people thought of the immune system in military terms: our white blood cells were soldiers on guard, watching out for any intruders. Yong suggests we appreciate our immune system more as a park ranger, one that monitors the status of its microbial wards,  encouraging and protecting some and weeding out or barring others.  He suggests further that our immune system in doing this is working more on the ward-microbes’ behalf than on ours, for microbes too contend with one another.  They’re constantly jostling for space, and humans unwittingly participate in the battle:   with every meal, we alter our micro-biome.  In the name of healing, w occasionally carpet-bomb our bodies — but the body is its own ecosystem, so dependent on microbes that many illnesses  should be viewed as a mismatch of populations than an invasion.

It is as grave a mistake to regard microbes as an easily-manipulated friend, says Ed Yong, as it was to regard them as an implacable enemy who must be hunted down and killed.  Although symbiotic associations are rife in nature, and abound in our own bodies,  they are not relationships.  Many microbes live inside us, and we depend on many of them as they do on us – but we are not ‘friends’. Instead, like nation-states working together, we merely enjoy a collusion of interests, and occasionally that collusion lapses.   In the macro world, for instance, tickbirds that ride on large mammals and groom them for ticks occasionally nip their rides, too. Further, no one has ‘a’ population of microbes; the pool of microbes in our guts and in our orifices fluctuates widely from hour to hour,  depending on our activities.

Reading this book made me marvel, literally. The image Yong conveyed of the dynanism of our bodies made me think of the sun — an ongoing nuclear explosion that is maintained by the sheer weight of its ingredients. The contests inside us for dominance, the side effect of these material struggles on our brains and feelings, boggles the mind.

Note:  I read this book much earlier in the year, but never posted my review for reasons which escape me. I decided to publish this week given that I’ve been in a science mood.

Citizen, librarian, reader with a boundless wonder for the world and a curiosity about all the beings inside it.
View all posts by smellincoffee →
This entry was posted in Reviews, science and tagged biology, science, sociobiology. Bookmark the permalink.

14 Responses to I Contain Multitudes