A Mighty Fortress:  A New History of the German People
© 2004 Steven Ozment
314 pages 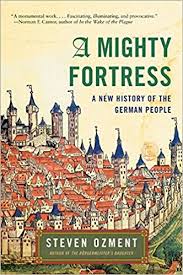 Like many Americans, I first knew the Germans only as the villains of our world wars. It wasn’t until college, when over-full Spanish classes thrust me into a German language course,  that I began to discover  the real nation in the heart of Europe. A Mighty Fortress recounts German history from their first encounters with Rome until Germany was re-united in the 1990s. Its object is to render an account which  is free from the tiresome preoccupation with looking for Nazi forebears.   We begin with the partial Romanization of the German tribes, the rise of the Carolingian kingdom,  the post-Charlemagne breakup, and the creation of that strange creature, the Holy Roman Empire.  The Empire was not a unified state in the model of Rome, but a complex  network of kingdoms, fiefdoms, and independent cities, in which a common aristocracy voted for an emperor whose authority varied over the years. (As with the other princes of Europe, the king constantly vied for power against the nobility and the Church.)  Throughout the late middle and early industrial eras,  central Europe was a common warzone between the powers, and Germans suffered the most — especially during the Thirty Years war.  This bloody  primed Germans for social caution,  so that attempts at imposing French-style revolutionary upsets were largely stymied. Napoleon’s victories over the Empire still imposed a large measure of revolutionary reform, however,  and a popular spirit would continue to strengthen from that point on —  resisted or managed by the authorities. The master at management — of the mob, of the princes of Europe — was Otto von Bismarck. He perfected the consolidation of German states begun by Napoleon by unifying  Germany into an empire in 1871. Although this review of German history covers chiefly political affairs,  occasionally an artistic or intellectual personality enjoys the spotlight.  They include Martin Luther,  Bach, Beethoven,  Faust,  Kant, Hegel, and Marx.  There is also an obligatory “Why Hitler” chapter, in which the author attributes the  “barbarian’s” triumph more to the plight of Weimar Germany (crises and an ineffectual government) than to some chronic itch to take over Europe.

Because A Mighty Fortress is such a general survey, it didn’t build much on what I’ve retained from a German history course taken years ago, except in its coverage of the late 20th century.  Those who know nothing of German history beyond Hitler may find it informative, but I’m certain there are more readable books out there for that purpose. (Even Nazi-focused books like The Complete Idiot’s Guide to Nazi Germany might be helpful…my  respect for Bismarck’s political skills began with that book, over fifteen years ago!)


Related:
Since it may be playing in your head right now, here’s a recording of “A Mighty Fortress“/”Ein Feste Burg”,  as recorded by an audience of three thousand men.

Citizen, librarian, reader with a boundless wonder for the world and a curiosity about all the beings inside it.
View all posts by smellincoffee →
This entry was posted in Reviews, Uncategorized and tagged Germany, history, survey. Bookmark the permalink.