Posted on April 8, 2017 by smellincoffee 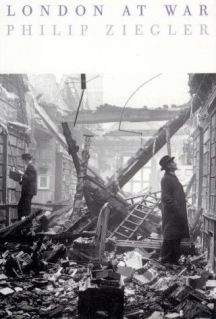 “London doesn’t look down at the ruins of its houses, at the remains of its churches and houses; London looks upwards, towards the Dawn,  and faces the new day with calmness and confidence.”

On April 9th, 1940,  Hitler’s Germany launched its great assault on the west, and by June had taken possession of  Norway, Denmark, the Netherlands, and France. England stood alone, as she had centuries prior when another jumped-up corporal seized control of Europe, and in that summer all of Hitler’s mechanical wrath and the hopes of the world were both centered on London.  London was then the largest and greatest city in the world, capital of not just the United Kingdom, but of a global Empire.  Peter Ziegler here uses the stories of Londoners who  stuck it out in the City through the war to deliver the story of the home front, as London experienced it.

London’s most famous association with World War 2, of course, is the Blitz. Though Hitler’s air strategy initially focused on destroying the RAF, after an errant bomb fell on Berlin he switched to bombing English cities instead.   While  the population at large wasn’t surprised by the idea of the Blitz,  concrete preparations left much to be desired. The ‘air raid trenches’ dug into the city’s parks had been excavated months prior, and were by then partially eroded and filled with water. Small wonder the Underground system was used instead, and so frequently that people began staying in the Underground even after the threat of bombing was past:  as late as April 1945, when the Nazi goose was well and truly cooked (and the Berlin wishbone about to be torn in two by the Allies and Soviets), some people still insisted on spending the nights with their regular shelter-mates.  Sleeping in the subway bunks had become an unexpected source of civic solidarity.

Although supplies would steadily dwindle throughout the years of the war,   Kriegel demonstrates that much of normality was preserved. The theaters, cinema, and even ballet stayed open most of time, even though the war’s absorption of most of the men —  the troupes were harvested for the troops —   disrupted    staffing considerably. Opera was less able to cope.   Holidays like Christmas were pursued with their usual enthusiasm, even as trade from the Continent largely disappeared. Not until the Christmas of 1944 were the shelves really destitute, judging by this.

Another source of disruption to ordinary London life was the presence of so many refugees and soldiers.  Prior to the great invasion of 4 June 1944,  the whole of England was clogged with American airmen involved in the bombing of Festung Europa, and soldiers waiting for that singular moment of D-Day.   Although Kriegel records some conflict between the American warriors and the English,  stemming from romance and money, on the whole he concludes that relations were amicable.  (He takes the same stance regarding London stoicism and the Blitz;  yes, there was a little looting, but on the hole the city kept its head  in such a manner as to bewilder a few Polish visitors.)   One source of tension between Americans and the English was race, for the racial segregation of the United States was absent in England.  On the opposite  side, Americans cheerfully ignored the formal class striations of old England – distinctions that were also weakened by the communal life in the air raid shelters , for there was no upper class in the Underground.

In addition to experiences which England at large experienced, bombing and supply deprivation, Kriegel also shares stories particular to London.Although many government services were sent out of the city to preserve them in the event of a truly devastating Luftwaffe attack,  As the nation’s capital,  London held the commanding spot in the United Kingdom’s patriotism —  for there, despite the bombs of the Luftwaffe, the Royal Family had fixed their standard, and there the prime minister took to the streets amid bombings to remind people that they’d soon be on their feet again.   Open spaces formerly reserved to society’s elite were opened up, their fencing taken to use in the war efforts. Building after building fell prey to the Nazi bombs, or the V-weapons, and people promised to use the war’s destruction as an opportunity to create a better city — one with fewer slums and more attractive housing to replace them. (Here the author adds a sad note that no,  what replaced the old buildings was not more attractive, and here London was failed.)

London at War’s heavy use of civilian journals commends it as a look at the home front during WW2, and a look at a proud city in a dark moment.

Those are not Hollywood sound effects. That is the music heard every night — the Symphony of War.

Citizen, librarian, reader with a boundless wonder for the world and a curiosity about all the beings inside it.
View all posts by smellincoffee →
This entry was posted in history, Reviews and tagged Britain, history, London, Related Vids, WW2. Bookmark the permalink.

5 Responses to London at War