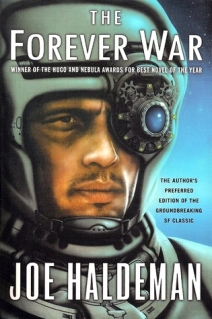 “I called to the waiter, ‘Bring me one of those Antares things’ Sitting here in a bar with an asexual cyborg who is probably the only other normal person on the whole damn planet.”

Sometimes you just can’t win.  In Joe Haldeman’s The Forever War, Haldeman relies on his experience as an engineer in Vietnam, and his extensive scientific reading, to create a visceral account of war and alienation in the far future.   He begins in the near future, however, in the 1990s, as an Earth which has begun to aggressively explore and colonize the Milky Way via a network of ‘collapsars’ becomes embroiled in a war against another spacefaring power.    Earth has never fought in space before, and since the Vietnam War had actually been tending toward global pacifism. A few veterans from previous wars guide Earth’s policy and martial strategy, however, and so begins a galactic quagmire that will span hundreds of years.   Yet because of the relativistic effects of near-light space travel, Private William Mandela and other troops in the first wave will become aliens to their own people,  aging only a couple of years as the decades pass on Earth.    I am not surprised in the least at Forever War’s enduring reputation for SF  excellence, as Haldeman succeeds brilliantly on multiple fronts.

At the heart of Forever War’s success is the curious consequences of relativistic physics.  Because time passes more slowly the closer a traveler gets to lightspeed,  what seems like weeks to Madella is years on Earth — and the more traveling one does, the more severe the distortions are. Haldeman hints at this early on, when a sergeant who barely looks older than Mandella  takes over their training. After only a couple of years of “subjective” time — that is, Mandella’s experience of time — he returns to Earth to find that decades have passed. His mother is elderly, and Earth is in a grim way.  Culture has changed significantly, too, and Mandella feels like a stranger in a strange land.  Despairing of finding a place on Earth, Mandella and his lover-in-arms Marygay return to the service.  Earth becomes a distant memory, but because the war lasts so long Mandella frequently experiences future shock as he encounters evidence of even more radical transformations in Earth’s culture.  These changes are staggering: the world is united under the authority of the UN, a government on a war footing which attempts to control every aspect of life, with resulting economic and personal depression. “Every aspect” includes sexuality, as homosexuality is used as a method of population control and assumes such prominence that heterosexuality is regarded as tantamount to sociopathy.  Haldeman’s perception of sexuality as fluid and complicated might get him stoned today, for conflicting with the present notions of hard-set “orientations”.  Yet here — as in 1984, as in Brave New World —  this government attempt to rein in the most unruly passion of humanity is resisted.    In the beginnig, Mandella and other soldiers are assigned sexual partners for the night, but tend to gravitate toward one particular partner. Mandella’s only thread of hope, of sanity in a universe constantly changing around him, is his fellow relic and lover Marygay.

The time dilation also effects the military consequences of the war:   Earth’s soldiers are far better at war in general, but because so much objective time passes between launches and arrivals, the Taurans often seem to be fighting with weapons from the “future”.  Those weapons bear mentioning, because the martial aspects of Forever War are the second big triumph for Haldeman. Frankly, I’ve never read  SF-military combat this interesting.  Key to space soldiering is the Fighting Suit, a skintight unit that protects and augments the body within; later on,  the fighting suits are an early example of technohumanism,  using an access port plugged in above the hip to interact with the body’s systems.   The suits allow for greater effacy and are vital to staying alive in a hostile universe, but they’re not foolproof.  Bumping against a rock of frozen gas might cause a deadly explosion, for instance, and if the suits are damaged in combat they’re likely to cause total user death through overheating and such. Still later “stasis fields” are invented that prevent electro-chemical activity, so  combat within them has to be  the old-fashioned stuff:  swords and arrows.

Virtually everyone who reads this catches the parallel between Haldeman’s soldiers — who return home to find it a foreign country in every way but the name — and returning veterans from Vietnam,  who found not a home but an insane asylum in 1960s-1970s  America.    Although modern readers aren’t traveling at the speed of light, sometimes it seems the world is. We’re all living in various stages of future shock, unless we’re kids for whom new things are simply to be expected, and so Mandella is our man.  I found his story gripping on every level — the science, the combat, and the societal evolution.   Although we’re unlikely to start zipping around the stars anytime soon, several aspects of Haldeman’s future bear thinking about: the control of society and  soldiers through chemicals, especially.

Citizen, librarian, reader with a boundless wonder for the world and a curiosity about all the beings inside it.
View all posts by smellincoffee →
This entry was posted in Reviews, science fiction and tagged Joe Haldeman, military, science fiction. Bookmark the permalink.

6 Responses to The Forever War