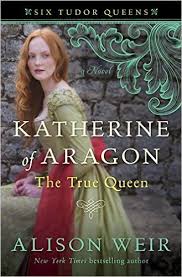 Mention the Tudor court, and invariably people think of Henry VIII and his famed mistress, Anne Boleyn. But the wife Henry abandoned came from a far more interesting family. Catherine of Aragon was the daughter of Ferninand and Isabella, the power-couple who united Spain and bankrolled Columbus’ journey across the Atlantic. Alison Weir, a historian-novelist who has produced both formal histories of the Tudor court and novels hailing English queens, now gives Henry’s only true queen her due. She begins the story in on the high seas, where a young Catherine is anxiously wondering what awaits her in England.

I daresay virtually everyone reading this is familiar with the particulars of Catherine’s ill-fated marriage to the swinish Henry VIII. We see a Catherine here who, while often at the mercy of the will of her father or English royalty, is not a passive creature. She serves as the de facto Spanish ambassador at one point, and later as regent of England when Henry is off fighting Frenchmen. When Henry’s desperation to sire a mini-me destroys the shared sorrow that once brought he and Catherine together and prompts him to begin looking for excuses to shack up with someone else*, she fights as best she can. To her is given an impossible task: to be obedient to her husband, who insists he isn’t, and simultaneously protect the marriage he has decided for reasons of state was a fraud. She does fight, though, using her position as the daughter of one of Europe’s most intimidating families, the Hapsburgs. She eventually loses all of her support, until like Thomas More digs in on the strength of conscience and honor alone. When my copy of the book vanished into the digital ether, she had been reduced to poverty, and Henry held her in bitter, angry contempt. (Darned magically-disappearing e-book checkouts!) The slow death — deliberate murder — of their relationship makes the book. There are other interesting relationships, too, like the appearances of Sir Thomas More, and even letters between Catherine and Erasmus.

Catherine’s character is the most compelling reason to read the book; I wasn’t particularly awed by the writing — at one point Henry declares that we can’t have every every Tom, Dick, and Harry can going around interpreting the Bible for himself. The phrase can be dated to the 17th century, but it sounds anachronistic — weird, even. I found Katherine largely enjoyable, but I was excited to find it to begin with; I’ve previously looked for novels that featured Catherine and Mary sympathetically.

Note: I didn’t quite finish this one. I was nearly late to town trying to finish it, and figured I’d take care of the last couple of chapters after work. No such luck; the checkout expired and now I’m #20 in line. If there’s a drastic alteration in my opinion based on the very end, I’ll repost.

* I could give Henry the benefit of the doubt if he’d made a wife of Anne, was faithful and such, but instead he chopped off her head and married four others. At some point we must call a pig a pig!

Citizen, librarian, reader with a boundless wonder for the world and a curiosity about all the beings inside it.
View all posts by smellincoffee →
This entry was posted in historical fiction, Reviews and tagged Alison Weir, Britain, historical fiction, Tudor England, women. Bookmark the permalink.

4 Responses to Katherine of Aragon