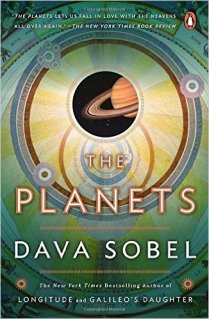 Like Lives of the Planets, Sobel’s The Planets is a flyby through the solar system. The inclusion of the Sun and Moon give this a classical feel, since those bodies were considered by the Greeks to be wanderers as well. This is most likely intentional, because Sobel steeps her descriptions of the planets’ exploration in the language of mythology and poetry, sometimes to a distracting level. A discussion of Holst’s suite, “The Planets”, is also included; although Sobel mentions a growing fascination with the scientific understanding of the solar system, the music was mostly inspired by the planets’ astrological import. Astrology also features heavily in one chapter, which will raise some hackles — it did mine. Mythology and poetry can be used for literary effect, but astronomy fought too long and too hard to escape its mooney-eyed cousin to sudden be thrown back into relations again. For the lay person, there is actual content here, just not a great deal — don’t expect tables of comparative volume, or probe photographs. There’s discussion of Venus’s greenhouse effect, of course, and Mars’ past life as a livable planet, and the curious relationship between Mercury’s rotation and revolution. Some of the information is delivered in…well, let’s say unconventional ways. In the chapter on Mars, for instance, the reader is given a lecture by a rock on its life history. This book is interesting if limited; for someone who has expressed mild curiosity about the lives of planets, sure — give it go. There’s lot of poetry and history to ease you into the waters before being surprised with ruminating on Jupiter’s cloud activity. The seriously interested reader has probably encountered the majority of the usual information before, however, and considered its datedness would probably be better off elsewhere.

Citizen, librarian, reader with a boundless wonder for the world and a curiosity about all the beings inside it.
View all posts by smellincoffee →
This entry was posted in Reviews, Uncategorized and tagged Astronomy, science. Bookmark the permalink.

3 Responses to The Planets