The First Congress: How James Madison, George Washington, and a Group of Extraordinary Men Invented the Government
© 2016 Fergus Bordewich
416 pages 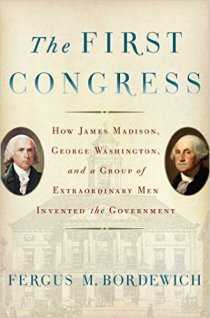 The first attempt at creating an American confederation resulted in a chronically bankrupt and impotent organization which no one took seriously. So mightily did it flounder that a convention was called to address its structural problems, and by way of solution they created the Constitution. Thus did the American experiment begin anew,  but a superior legal start didn’t guarantee steady success. Ultimately its success would depend on the men responsible for turning ink on paper into a functional government, principally the men of the first congress who had a world of policy to establish and precedents to set.   Drawing on journals and official records, Mr. Bordewich has produced here a month-by-month chronicle of the first congress’s work in and out of session, as sectional rivalries and opposing philosophies of government went head to head for dominance. Ultimately progress came through  deal-making, and some vital decisions were made not on the floor of Federal Hall, but in the dining rooms of the influential.  Bordewich succeeds in turning months of argument amid miserable weather into a fascinating narrative.

The challenges facing the first government of the United States were outstanding: the union consisted of eleven states, many with hazy western borders. Along those borders were encamped restive Indian nations, notably the Creek, and the armed forces of Britain. The states bickered with one another over water resources and were themselves awash in debt,   North Carolina and Rhode Island had yet to agree to adopt the Constitution, and the presumably-elected president George Washington was confined to bed.    Major political issues faced the nation: what to do with the debt, for instance, how to strike in practice the balance of power between the Legislature and the executive, where to established the federal capital, and what do to with the Indians. To make matters worse, the Quakers insisted on sending petitions to Congress to address slavery, even though the Constitution forbad federal action on it for twenty years after its adoption.   Each of these issues had powerful personalities eager to fight with one another.  The siting of a national capital, for instance, wasn’t merely a division between north and South.   New York and Pennsylvania were as jealous of one another as they were of the South; even John Adams loathed the thought of gracing Philadelphia or its environs with the capital.   Issues like the debt were not simply about money:  the question of whether the Federal government should take responsibility for the individual war debts of the states turned Madison from a Federalist into a Republican: he knew if the federal government took responsibility for that debt,  it would assume greater authority over the states themselves.   Slavery’s volatility needs no introduction, driving the union as it did to war.

Arguing these issues are a score of personalities, some famous but others generally overlooked. Madison is central, of course, as one of the Constitution’s key contributors and the man later tasked with presenting amendments proposed by the States to Congress. He dominates early, functioning as Washington’s prime minister in the House,  though later loses ground to Hamilton as financial matters rear their head first in the matter of the assumption of state debt, and later in the establishment of a national bank.  Other notable characters are Oliver Ellsworth, who helped establish the structure of the federal and Supreme Courts, and an antifederalist William. Maclay whose diary is a major source.   Washington and John Adams, though not congressmen,  also feature.

Bordewich’s favor is with the victors,  seeing the triumph of a strong executive and Hamilton’s financial schemes over agrarian skepticism as a step forward for the United States in moving toward enlightened, modern capitalism.   His bias is not overt, though one might make a drinking game out of his referring to the Hemingses as enslaved.  In addition to the thoughtful history that makes it clear how fundamental some of the Congress’ decisions were,  Bordewich’s history also shares quite a few fascinating little tidbits. Poor Rhode Island, for instance, was bullied into joining the Union:  late into the first Congress’ term, the Rhode Island legislature failed to ratify the Constitution. Not only did Washington snub them during his tour, but the surrounding states ceased communication and transportation into the little state.   Also of interest: Thomas Jefferson learned of his appointment as Secretary of State only by reading the papers when he arrived at home!

Bordewich’s history isn’t quite as lively as Joseph Ellis, but it is very close, a significant feat  given its greater ambition.  It makes the first Congress’ accomplishments clear, not only in establishing a new national government from the ground up –  figuring out what was needed, and how to fit it within the limits of the Constitution – but in creating union  through compromise, the most famous example  being a southern site for the capital in exchange for the wealthy cotton states agreeing to let the federal government assume the collective debt of the states.   The First Congress is superior popular history, serious, but personable still.

Citizen, librarian, reader with a boundless wonder for the world and a curiosity about all the beings inside it.
View all posts by smellincoffee →
This entry was posted in history, Politics and Civic Interest, Reviews and tagged Early American Republic, history, law, politics, Politics-CivicInterest, US Constitution. Bookmark the permalink.

1 Response to The First Congress