The English People on the Eve of Colonization 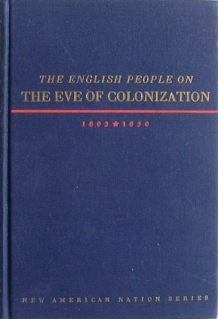 If there was ever an exemplar for not judging a book by its cover, The English People on the Eve of Colonization is it. The binding is plain and burdened by an unwieldy title that seems to threaten readers with clouds of dust and pages of population statistics upon opening. Instead,  Wallace Notestein delivers a lively social history that opens the hood (or bonnet, if you prefer, since we’re looking at the English) of Stuart England, revealing the social machinery at work inside.  Here are the daily lives of men both great and small – the details of their work,  their concerns – and an examination of the institutions which create and sustain civilization Notestein’s chatty survey gives life to farm laborers, country gentlemen, sheriffs and justices of the peace; he also takes us to the Inns of Court and the universities, the very marrow of intellectual life.    Although there are brief chapters on Parliament and the corporations that would lead the way in exploring the globe and settling the new world, the emphasis here is on the small and ordinary, and delivered in so personable a fashion that one is immersed in the life of centuries gone by without realizing he’s being educated.  Religion isn’t addressed directly, beyond the life of the church as a community,  which is the only hiccup.

Citizen, librarian, reader with a boundless wonder for the world and a curiosity about all the beings inside it.
View all posts by smellincoffee →
This entry was posted in history, Reviews and tagged Britain, history, law, social history, Stuart England. Bookmark the permalink.