Posted on September 26, 2014 by smellincoffee 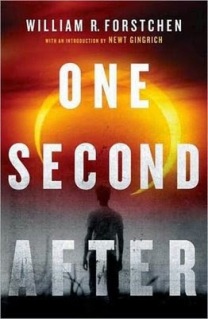 When the power blinked, Colonel John Matherson wasn’t alarmed. These things happen. But they don’t happen at the same exact time as failing phones, stalling cars, and falling planes.  As night fell and nothing changed, he began to suspect the worst: that America had been attacked. One Second After turns a Norman Rockwell life into a horror story, taking readers through a town trying desperately to hold on to survival after its entire world collapses.

Like any horror story, this is grisly and exciting; as Matherson quickly realizes, his city has been the victim of an electromagnetic pulse,  probably generated by a nuclear detonation in the atmosphere.  Virtually every electrical device is now kaput. Cars, computers, even telephones and clocks are dead.  One character notes in alarm that they’ve been thrown into the Civil War era, but their fate is far worse than that; as the historian Matherson notes, the world of 1865 had its own infrastructure. That was a world of widespread farming and home industry, of self-reliance. With electricity went every tool and system the modern world depends on; the trucks, trains, and ships that moved food from across the continents;  the computers that managed the money. The integrated world economy, David Ricardo’s dream coming true, meant the utter dependence of every community on thousands of others.  With thousands of people needing medicine and food every day, and without the means to produce it or import it again as needed, One Second After is a tale of slow death.

The technological order having collapsed, and the old traditional skills having been forgotten,  the people of town are in a bad way. An early scene in a nursing home overwhelms Matherson and readers with a hint of the tragedy that is to come;  its staff unable to come to work, and medications running low,  four medical personnel are alone in a building filled with dozens of elderly who need constant care. Matherson is there to evacuate his father in law, but when he arrives he finds death, disease, and despair; the staff are overwhelmed, unable to cope.  It’s a gut-wrenching scene, but devastation won’t be limited to the nursing home. Those dependent on medications in the civilian population are first to decline; food poisoning, disease, and strife ravage the population in turns.  Without comforts, ferality rears its head; as some give in to their inner beasts, Matherson and others do their utmost to preserve some dignity. They study the situation, make plans for the future, organize defense against what mobs and nature are throwing at them, and  strain not to break themselves.

While rock bottom is never reached, and there is some marginal reason for hope at the end, this is a truly harrowing story. There are minor issues with the style —  the characters often remind themselves  that “we’re still Americans”,  invoking memories of higher ideals, but in too unvarying a way —  but this is a small fly in the soup. As devastating as the barrage of crises is,  the main character continues to hold on, making it inspirational. There’s no question that this novel was written as a warning; the story is bookended with notes from a  congressman and a military intelligence officer who remark on the dire need to prepare for the aftermath of this kind of an attack. That warning applies not just for Congress, however, but for people, too;   Matherson’s city profits from the skills of a few survivalists and hardcore Civil War reenactors, but  the townsfolk on the whole are not prepared. Accustomed to buying everything as needed from the store, no one has any extra provisions or supplies set aside.  Little wonder ‘prepping’ booklists often include this one.

While I don’t know how likely an EMP attack is, One Second After is a chillingly effective warning of how fragile everyday life has become.

Related:
Lucifer’s Hammer.  An apocalyptic novel following an asteroid impact, this also has a cannabalistic horde. It’s also more firmly a science fiction novel.
World Made by Hand, James Kunstler.  This is far gentler, since it’s set long enough after the peak oil scenario that collapses the modern world that characters have adjusted to living in the 19th century.
Supervolcano: Explosion, Harry Turtledove.  Similar scenaro

Citizen, librarian, reader with a boundless wonder for the world and a curiosity about all the beings inside it.
View all posts by smellincoffee →
This entry was posted in Reviews, science fiction and tagged disaster, doomsday, horror, science fiction. Bookmark the permalink.

2 Responses to One Second After