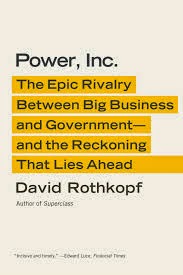 Historians of western civilization are used to viewing its late medieval and early modern period through the lens of a church versus state battle; the reformation owes as much to the desire for German princes to be free of the Roman pontiff’s command as it does belief  in theological purity.  Concurrent with the battle between Crown and cathedral, however, was another war; one between the crown and commerce. In Power, Inc, Alexander Rothkopft gives a history of the modern world, of the economic tides that eventually created polities greater than many states: corporations. The history, which covers economic entanglement in wars of the period as well as the evolution of Law, doubles as a plea for sharper control of corporations by the government.

Although Rothkopf draws on a variety of examples throughout the work, his anchor is the Stora corporation. Granted a charter in 1347, what began as a copper-mining operation turned Sweden into a power to be reckoned with during the Thirty Years War, but outlived its beneficiary by continuing to adapt to the modern world long after Sweden had been overshadowed once again by Germany, France, and England.  Although the economic forces unlocked by the scientific and industrial revolutions were initially used primarily for the benefit of the king,  governments soon lost control; the developing rule of law in modernizing country soon triumphed over the king’s will, but instead of protecting all parties the law  in America eventually became the faithful servant of corporations. Granted fictional personhood, and all the rights (but none of the responsibilities) thereof,  corporations became ‘super citizens’ whose globetrotting power now rivals the majority of nations. Loyal to none and increasing free of legal restraints (courtesy of globalization),  their might has prompted nation-states to adopt their methods   But countries are not businesses, and if maximizing economic profitability becomes the standard for good governance we will be in a bad way, riven even more by inequality and utterly beholden to economic titans.

Power is organized smartly,  linking a breadth of information;  this is a lesson in the rise of the rule of law from military might and kings as well as the tale of the global economy’s transition from medieval marketplaces to fiendishly complex financial markets.  The golem-like creation of corporations delivers appropriate horror, but Rothkopf sees the battle between states and corporations as one sided, with corporations cast as the villains and governments diminished victims. Although he mentions the revolving door that sees corporate executives occupying seats within the government ‘overseeing’  the businesses they once worked for, and will again when they are out of office,  the way government is used to increase the power of corporations — through subsidies, or through legislation that smothers smaller businesses but leaves the big-business beasts intact —  are absent altogether. Sterner regulation, even when applied through global bodies, will only lead to more of the same.

Power, Inc doesn’t quite live up to its name  in giving an account of people being pawns between government and business, but it does offer a look as to how corporations are becoming utterly lawless in the global era.

Related:
No Logo and The Shock Doctrine, better anti-corporate books by Naomi Klein

Citizen, librarian, reader with a boundless wonder for the world and a curiosity about all the beings inside it.
View all posts by smellincoffee →
This entry was posted in history, Politics and Civic Interest, Reviews, Society and Culture and tagged business, history, liberal-progressive, money, politics, Politics-CivicInterest, social criticism, Society and Culture. Bookmark the permalink.