Ninety Percent of Everything

Ninety Percent of Everything:  Inside Shipping, the Invisible Industry That Puts Clothes on Your Back, Gas in Your Car, and Food on Your Plate.
© 2013 Rose George
287 pages 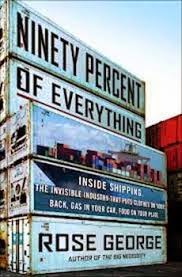 What is 1300 feet long, travels the distance to the Moon nearly annually, and is nigh-invisible? The answer is any container ship, fleets of which convey the overwhelming majority of all goods traded between cities and continents, but which most people never think about.  This may be so because so few people work in modern sea-shipping, or because in the age of terrorism ports are severed from the cities they serve, blocked away by miles of walls and checkpoints.  In Ninety Percent of Everything, journalist Helen George spends several months aboard a ship owned by Maersk, a Danish commercial giant,  meeting the men and women who keep the fleets float in an effort to understand their experience and the importance of the shipping enterprise in the 21st century.

Like the containers the ships are filled with, Ninety Percent is a glorious grab-bag of topics; a little history, a little science, a little travel, a little military action on the high seas.  The Maersk Kendal, George’s home for most of the trip, is lead by Captain Glenn, a man who lived through the revolution in shipping that followed “the Box”, or the advent of containerization. Once a young seaman on a tramp steamer that moved from port to port, picking up small articles,  he witnessed the death of old harbors that were closed to make room for the far larger equipment needed to handle the containers. He is a romantic figure who can navigate the seven seas on a sextant alone, even if the march of time has forced him to spend his days a wheelhouse that resembles a computer lab.  Steaming from city to city, through monsoons and canals, ships like his can arrive in a harbor and completely turn over hundreds or thousands of containers in less than 24 hours  before departing into the night.

The seamen’s experience remains as it has for thousands of years — lonely, dangerous, and often boring.  The views from the ship are of nothing but a long expanse of boxes piled another, and the work is similarly dull for most,  constantly cleaning and painting the ship, or tending the house-sized engine.  Most sailors come from developing countries the world over, and especially from the Philippines since their ability to speak English is prized. Dismal and unnoted as the work is, like most jobs it’s better than starving. As the captain of the Kendal laments, even today when the fast container ships have reduced the globe from the world to a village, their crews are treated like the ‘mere scum of the earth’.  Ms. George  also includes a segment spent on a military vessel hunting Somalian pirates (taking a decidedly unromantic attitude towards the sea-going thugs who are the object of so much fascination by the western press), and visits a portside organization that does its best to ameliorate the condition of the sailors, offering them counseling and sending them goods from home.  Although the book concerns modern shipping, George keeps it grounded in history as she can, retelling the story of World War 2’s merchant marine sailors who endured the same danger for the same purpose as the Navy, but with little honor or compensation rendered.  One positive aspect of the sailors’ experience is their time spent in the company of the sea’s abundance of life, especially dolphins

Ninety Percent of Everything succeeds in going aboard the massive machine that is a container ship and giving its lifeless expanse of hull and rows of containers a human face;  for all the automation, the sealanes still remain the province of sailors who have brain enough to engineer solutions against fickle winds and waves. While George doesn’t spend a great deal of time about the mechanics of shipping (nor should she, seeing how that territory was well done in The Box),  her account of the human side makes for fantastic reading. Her Yorkshire ancestors would surely be pleased.

Citizen, librarian, reader with a boundless wonder for the world and a curiosity about all the beings inside it.
View all posts by smellincoffee →
This entry was posted in Reviews and tagged commerce, goods/services, journalism, military, Nature, Rose George, sea stories, shipping, transportation, travel. Bookmark the permalink.

2 Responses to Ninety Percent of Everything